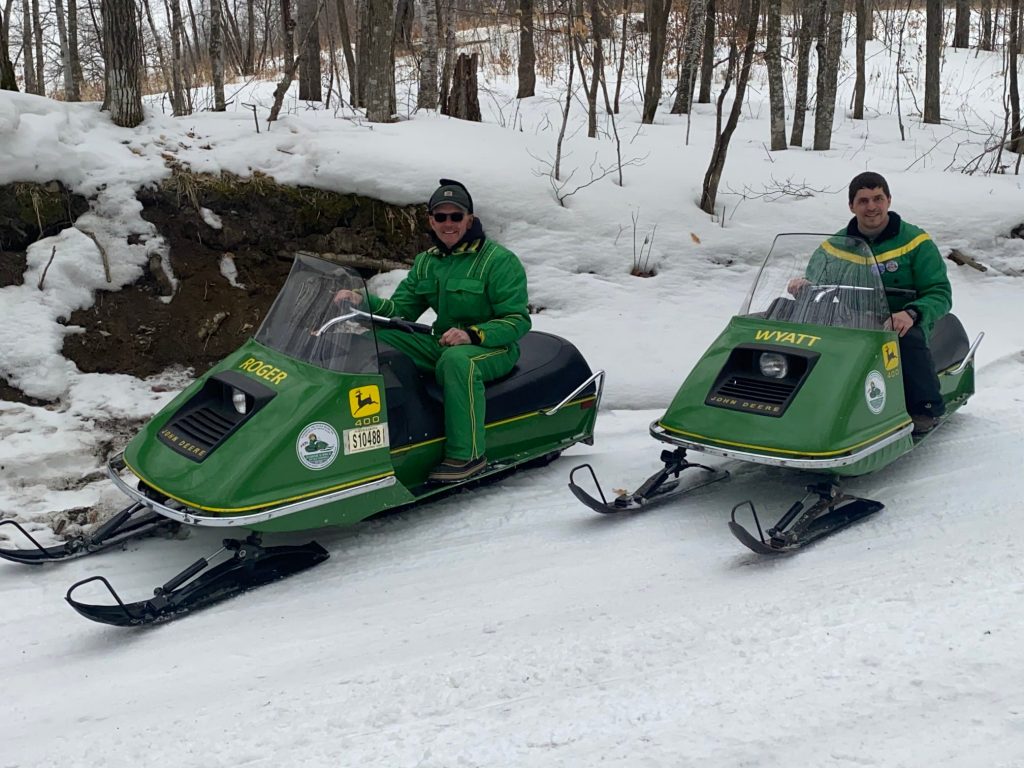 Steinback, MB — A pair of John Deere Snowmobile collectors from Cass County, North Dakota will be taking a unique and grueling challenge on their vintage sleds later this month. The father and son duo of Roger and Wyatt Kram (krom) are checking off a bucket list trip of riding their 1973 John Deere 400s from Winnipeg, Manitoba to Elk River, MN, just north of the Twin Cities, mimicking the historic I-500 snowmobile races that test both man and machine. Roger Kram, who is no spring chicken at 67 years old, said it’s a trip he’s always wanted to do.

Roger and Wyatt will depart from the starting line in Manitoba on Tuesday, January 25th and make stops in Thief River Falls, Detroit Lakes, Alexandria, Becker, and cap off the journey of roughly 500 miles at one of the largest gatherings of vintage snowmobiles in the country in Elk River on January 29th.

The vintage John Deeres that Wyatt and Roger will be riding have been upgraded with a few minor creature comforts to make life a little easier on the trip, including hand warmers, GPS, and mechanical updates to increase reliability. A mechanic with an enclosed trailer will follow them during the ride to assist with any fixes. Wyatt notes that after every day of riding, they will still need to go through each snowmobile with a fine-tooth comb to make sure every nut and bolt is tight, and the machines are mechanically sound. The constant wrenching, along with the physical abuse, will be their biggest challenge, according to the pair.

The ride isn’t all for personal satisfaction. They are raising money through a John Deere Snowmobile raffle that will go to support the local honor guard, a cause that’s near and dear to Roger’s heart.

This year also marks the 50th anniversary of the first John Deere Snowmobile. John Deere actually won the historic I-500 Winnipeg to St. Paul cross country race in 1976 with Brian Nelson, a current Detroit Lakes native, behind the handlebars.

You can find out more about the raffle as well follow along with Roger and Wyatt Kram’s 500 mile snowmobile ride by visiting the I-500 Challenge Ride Facebook page. Listen to the full interview with them below from the KRJB Kaleidoscope Program.