HCV Wrestling to Pay Tribute to Military on Thursday Night 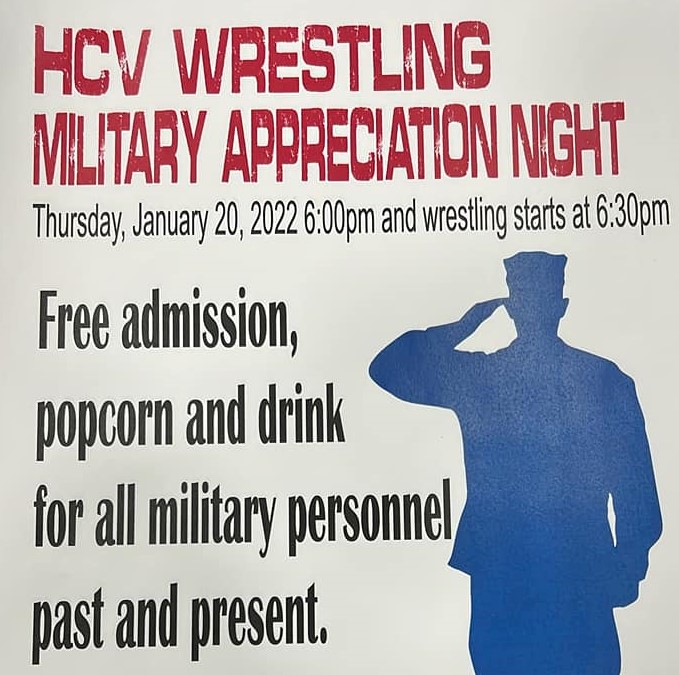 Hillsboro, ND — This Thursday, January 20th, the Hillsboro-Central Valley Wrestling Team will be paying a special tribute to all members of the military during their 1st Annual Military Appreciation Night at the Hillsboro Events Center. Anyone enlisted or retired military will be given free admittance to the event, along with some free concessions and other goodies. And with it also being Parent’s Night and Senior Night, Hillsboro-Central Valley Assistant Wresting Coach Rob Owens hopes it’ll be a packed house for this special tribute.

To add to the Military Night Tribute, Owens says the wrestlers will be wearing special camouflage uniforms when they square off against Grand Forks Central on Thursday night.

Coach Owens notes that there have been a number of Hillsboro-Central Valley wrestlers in recent years who have went on to pursue careers in the military, making this event a little extra special.

Military Appreciation Night for Hillsboro-Central Valley Wrestling is Thursday, January 20th at 6:30pm at the Hillsboro Events Center. If you can’t make it in-person, you can watch the contest online at www.yourliveevent.com.