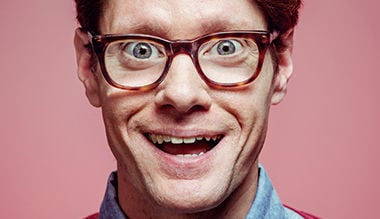 Ulen, MN — He’s performed alongside a number of Minnesota comedy greats, such as Nick Swardson, Maria Bamford, and the late Louie Anderson, been featured on NBC’s Last Comic Standing, and even has two full specials on Dry Bar Comedy, but now’s Tommy Ryman brings his clean comedic performance to the Top Hat Theatre in Ulen this Saturday, February 5th.

Ryman got his start in stand up comedy roughly 15 years ago with open mic nights and slowly began working his way up the ranks. But following his appearance on Last Comic Standing in 2014, that’s when he began to perform full time.

Stand-up comedy has seen a resurgence in popularity over the past few years. Ryman credits the variety of platforms and social media to providing more exposure to comics.

Opening for Tommy Ryman this Saturday, February 5th at the Top Hat Theatre in Ulen will be up and coming comic Cianna Violet and Blu Kanu, the local sibling singing duo of Rhoda Habedank and Artie Anderson.

Listen to the full interview with Tommy Ryman and check out a sample of his stand up below: