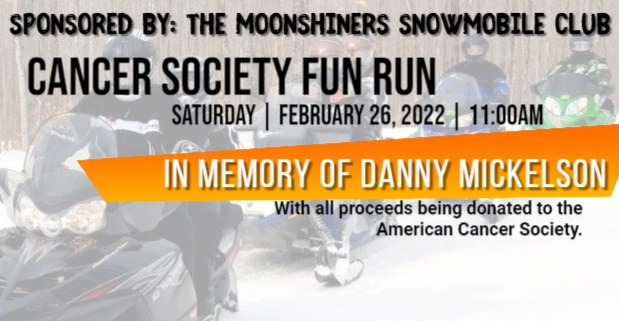 Twin Valley, MN — The Moonshiners Snowmobile Club is hosting their first ever “Ride for a Cause” American Cancer Society Fun Run this Saturday, February 26th in honor of an impactful member of the local snowmobiling community. The ride is in memory of Twin Valley’s Danny Mickelson, who lost his life to cancer this past year. Mickelson was a very active member in the community and despite not having use of his legs from an accident when he was younger, was an avid snowmobiler. Daren Anderson of Moonshiners Snowmobile Club says he played a major role in the reformation of the Moonshiners and this fun run is a great opportunity to honor him and anyway who’s been impacted by cancer.

The ride will get underway at 11am on Saturday and will feature stops at the Twin Valley Liquor Store, County Road 38 Bar and Grill in Flom, Ulen Liquor Store, Felton Bar, Borup Bar, Main Street Bar and Twisted Sisters Pub 21 in Ada, and Who’s Place in Gary. What’s neat about this fun run, according to Anderson, is that you can start at any location and you don’t need even need to ride a snowmobile.

There will be plenty of snow for riding this weekend, but Anderson notes that grooming has been a challenge recently to the winds and cold weather.

The cost to participate is $20, which can be paid at the Twin Valley Liquor Store at the end of the run around 5:30pm. All proceeds will be donated to the American Cancer Society.