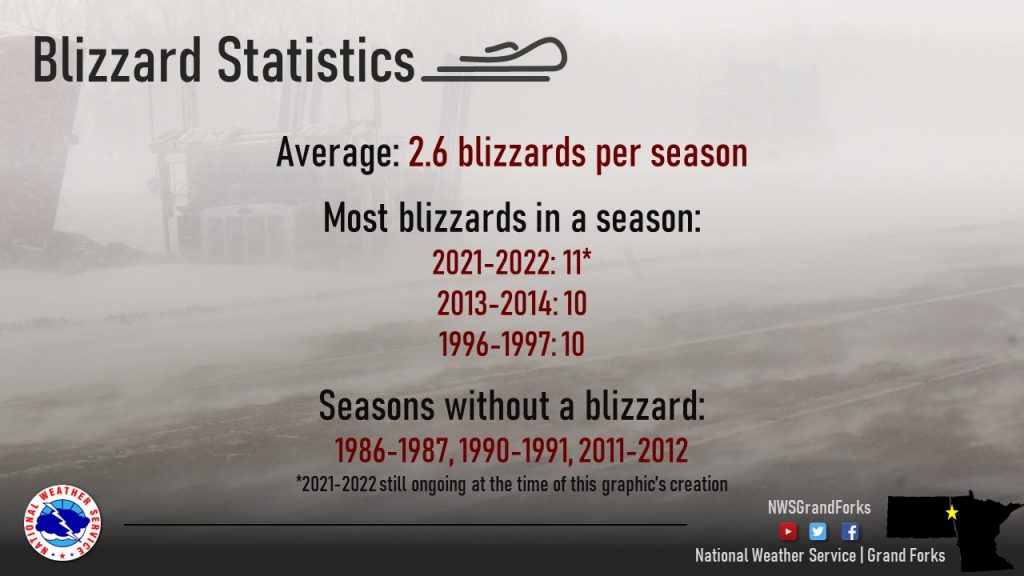 Grand Forks, ND — The National Weather Service in Grand Forks has issued more blizzard warnings during the 2021-2022 winter than any other winter season in history, and as we all know there is still plenty more winter to go. As of today, the National Weather Services has issued 11 Blizzard warnings, beating out the 1996-97 and 2013-14 winters which each had 10. An average winter, for comparison, has around 3 blizzards, or 2.6 to be exact. While they compare in the number of blizzards, NWS Meteorologist Timothy Lynch says there are a few key differences between this winter and the winter of 96-97.

Lynch adds that while the winter of 96-97 was a difficult one, it was the perfect combination of events during the spring thaw that led to the historic flooding in the Red River Valley.

So far this winter, most of the blizzard systems have been Alberta Clippers, whereas 96-97 saw more Colorado Lows. Lynch says the Clippers bring much more wind, while the Colorado Lows bring more snow.

While the 2021-2022 winter is well behind the 96-97 snow totals, roughly 20 inches, it’s still 20 inches above the average snowfall for this time of year. The National Weather Service is predicting at least moderate or low-end major flooding for most of the Red River Valley this spring.