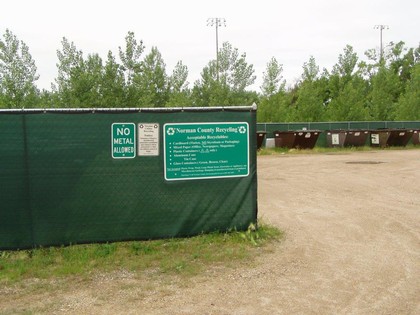 Ada, MN — Norman County Environmental Services is reminding county residents to reduce, reuse, and recycle when it comes to their waste, but also be smart about what they recycle and avoid putting unaccepted items in the recycling bins. There are several dozen bins located at the recycling sights throughout Norman County with the majority of them being located in Ada and Twin Valley. Norman County Environmental Services Director Garry Johanson reminds folks what is and what isn’t accepted at their recycling sites.

Norman County does have cameras at some of their recycling sites for the purpose of prosecuting those who illegally dump items, as do many townships throughout the county. Johanson says illegal dumping has become a major problem at many of the area townships.

Thanks in part to the rise of Amazon and other online ordering services, the recycling centers have seen an increase in cardboard over the past couple years which had led to the sites overflowing at times, especially during the holiday season. A simple solution would be to increase bins, which would cost more money, but Johanson notes that could be avoided if people would take the time to crush or flatten their boxes.

If you have questions regarding recycling or solid waste, please contact Norman County Environmental Services at 218-784-5493.

Listen to the full interview with Garry Johanson below: